The conference brought together over 280 participants and representatives from 64 different organizations for a full day of speeches, panel discussion, and an open forum covering the background, challenges, and solutions for changing the social norms that perpetuate violence. Throughout the day, we also encouraged exciting, free form dialogue through stalls themed by gender sensitization, single women’s issues, women’s right to sanitation, and CORO’s model. As the first women’s university in India and a leading institution of women’s studies, we were honoured to partner with SNDTWU and hold the conference on their campus. The conference was also generously supported by Azim Premji Philanthropic Initiatives (APPI), Edelgive Foundation, Cigna, and the Canadian Consulate. 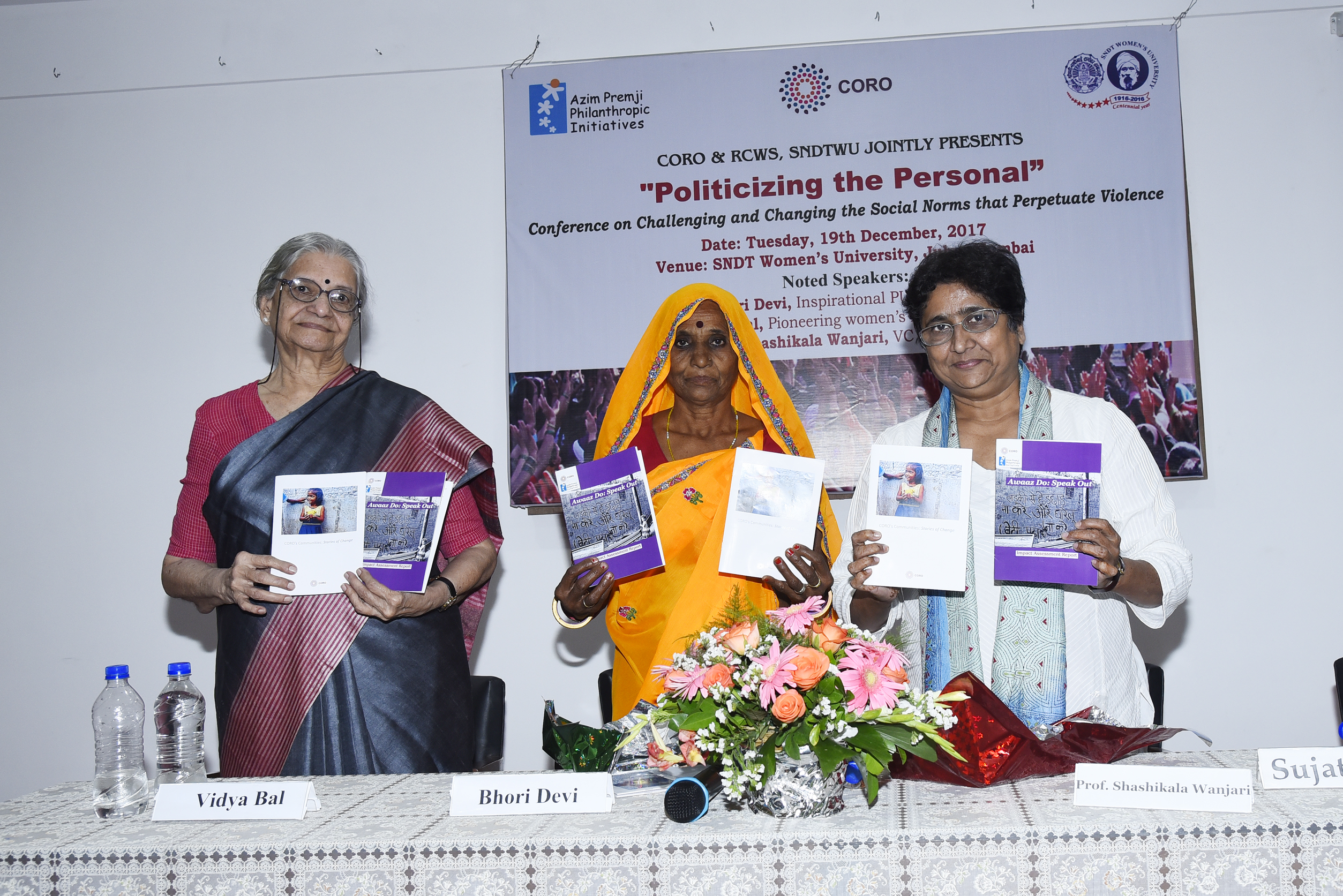 The conference began with an invigorating disruption as grassroots voices took the stage to proclaim their “words of change.” A swell of answering voices arose from the audience as more joined in, shouting their expressions of change. At this moment, Bhori Devi and Vidya Bal entered the conference to a standing ovation. The conference was introduced by Dr. Archana Bhatnagar, Head of Department for the Research Centre for Women’s Studies at SNDTWU and Dr. Vatsala Shukla of SNDTWU.

Sujata Khandekar, Founding Director of CORO, then presented the background and objectives of the conference and introduced its inaugural speakers, starting with the remarkable PUCL activist, Bhori Devi. 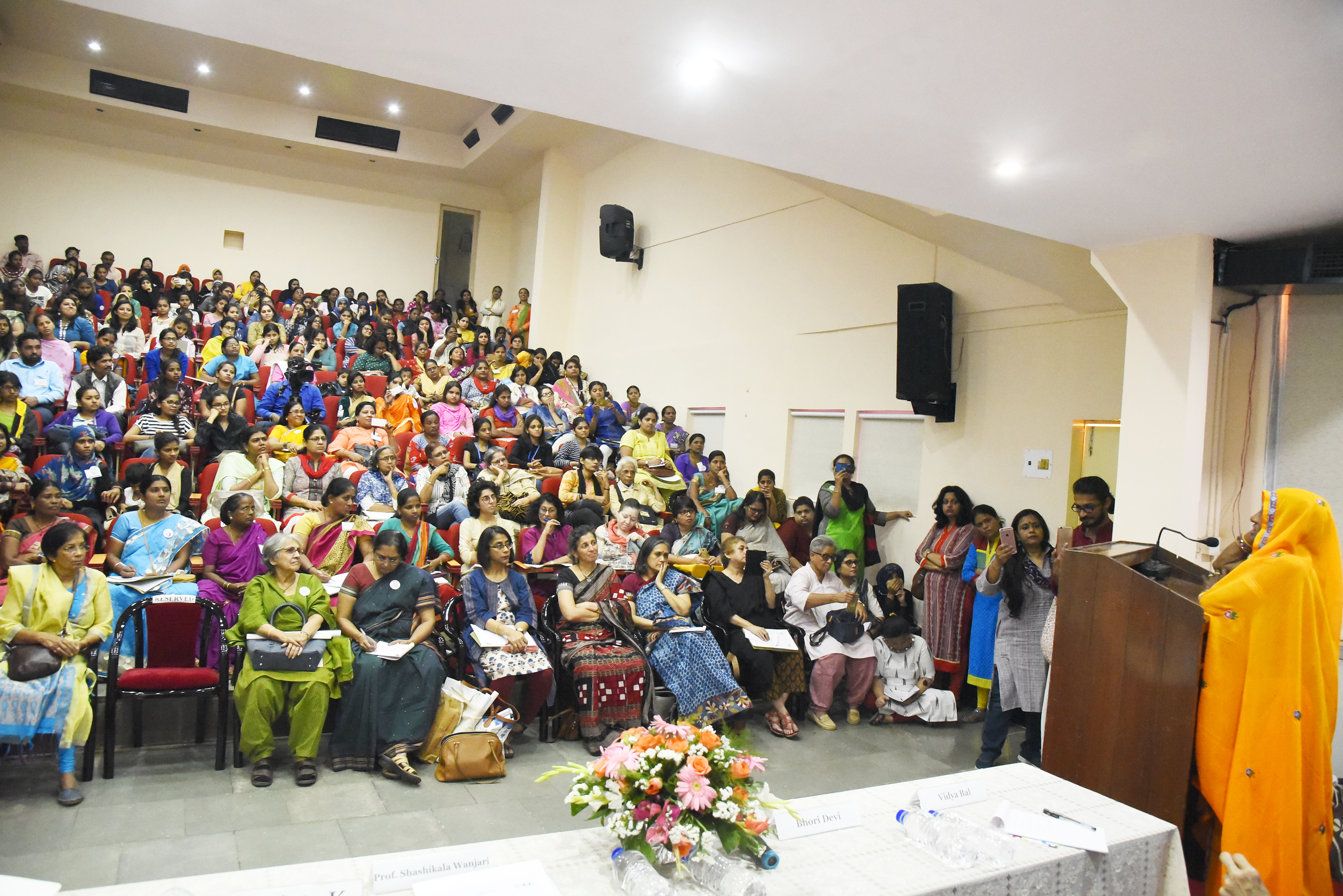 The audience was electrified by Bhori Devi’s speech about her extraordinary life story and struggle with personal and systemic violence and the social norms that preserve them. Dr. Shashikala Wanjari, Vice Chancellor of SNDTWU, spoke next, noting, “It’s our responsibility to come together and fight this battle.” Vidya Bal, our third inaugural speaker and a pioneering feminist, remarked, “There is a 20-year-long struggle behind Bhori Devi’s strong voice.” Throughout her address, Vidya Bal stressed the importance of inclusivity and solidarity in the movement - with men, Muslims, and people from across the spectrum. “Dialogue is the way forward, conflict is not,” she concluded.

How do social norms perpetuate violence? And how can we address violence at the root by changing these social norms? These were the questions this panel aimed to address. 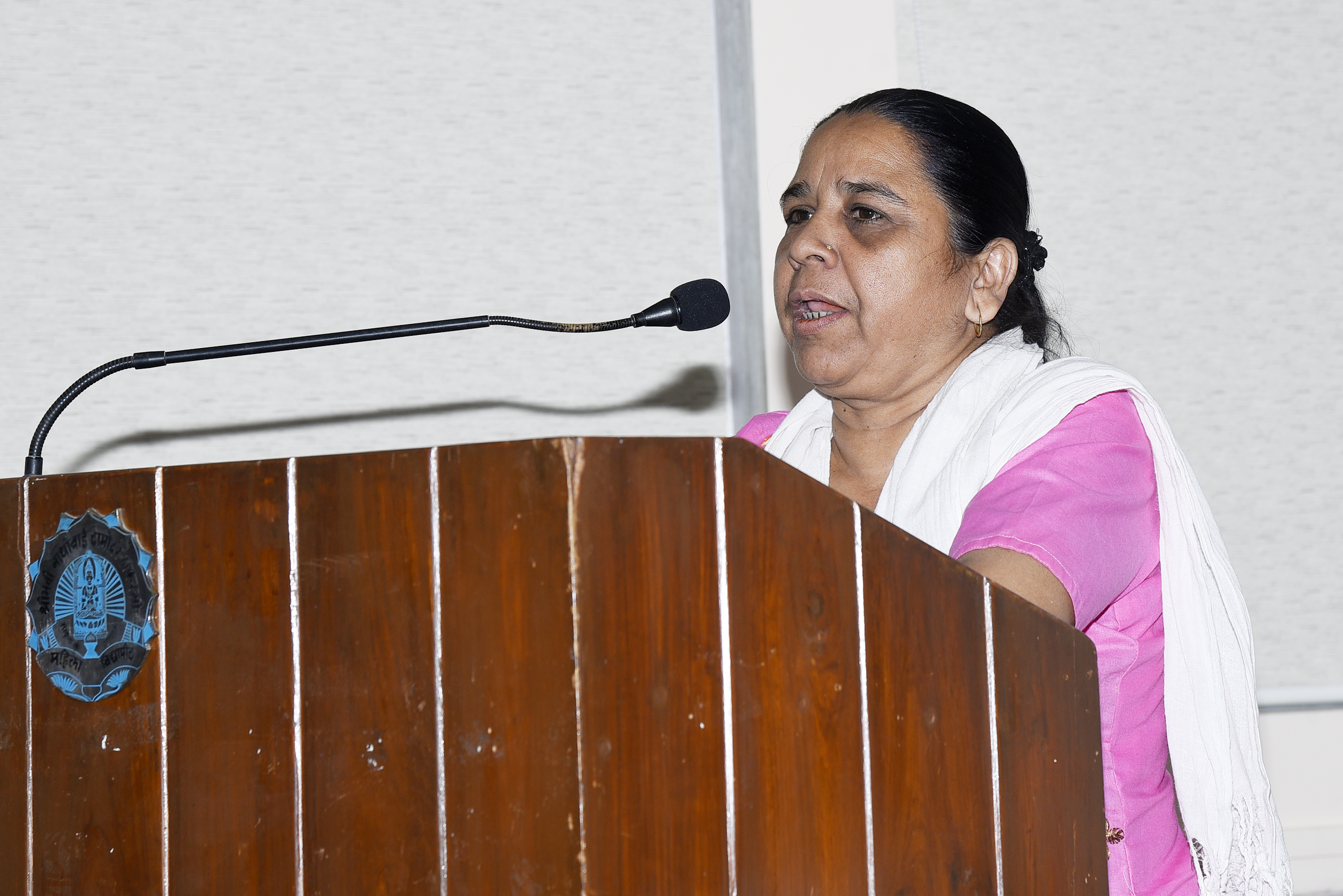 Shakhila Siddiqui described her journey with the CORO Mahila Mandal Federation that led her to this point where she exclaimed, “By standing in front of you today, as a Muslim woman, I am breaking social norms!” Professor Bhavna Mehta shared her the importance of work in the field and of safe spaces for women and survivors of VAWG, which she has made a reality through her Counseling Centre for Survivors. Sonali Khan focused on the need for conversation and communication to “break the ‘sense of isolation’ that VAWG survivors feel.” She expanded on this, saying “If we want to change society we have to begin with ourselves, our language, our actions.” 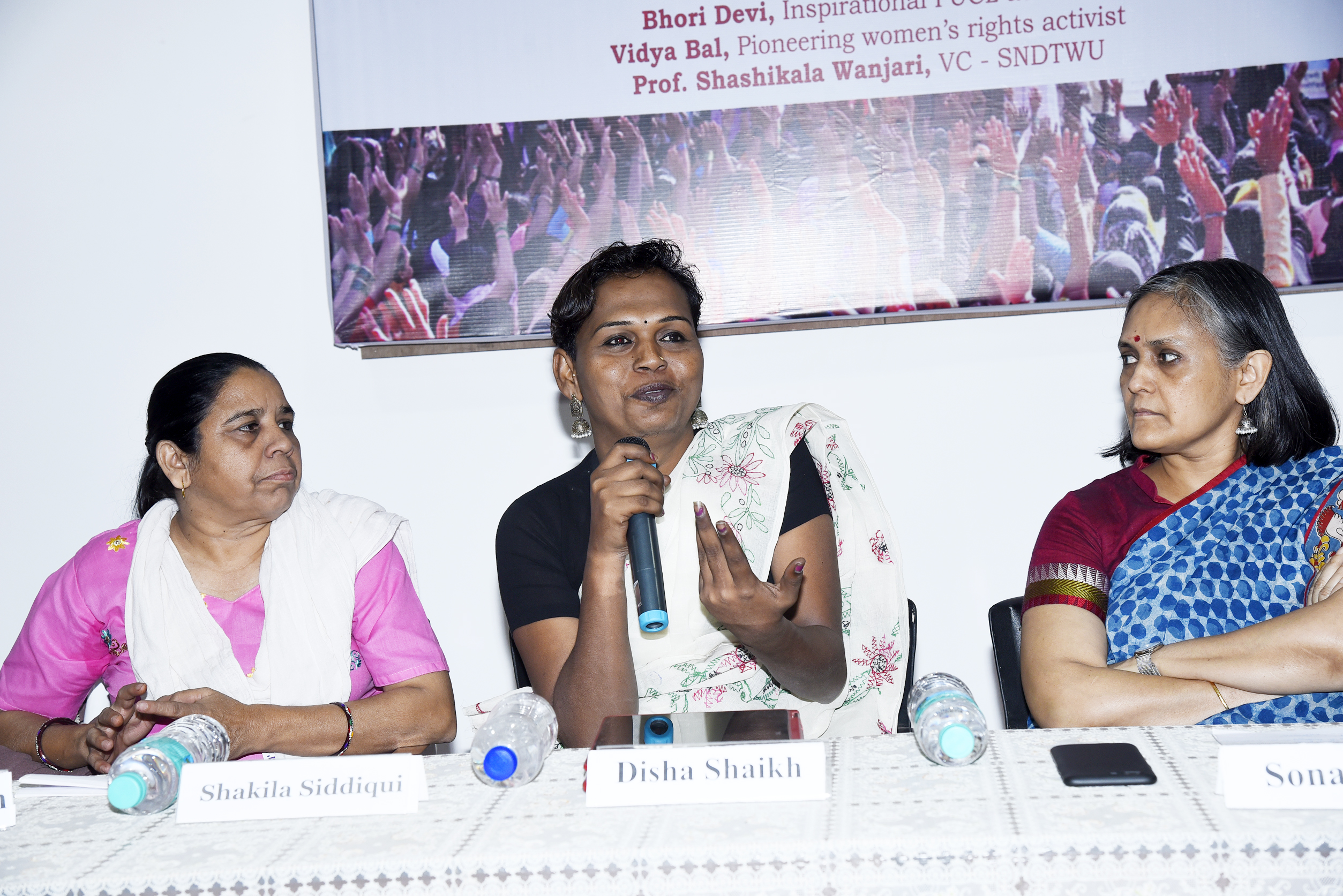 Disha Shaikh shared her perspective as a transgender woman who is constantly affected by social norms and violence: from the tradition of gifting bangles to men as a way to shame them to the importance of talking to children about sex, sexuality, and gender norms.

Why is it important to engage men and boys when fighting VAWG? How can we encourage them to choose equality and respect over dominance and violence? This panel was based on these questions. 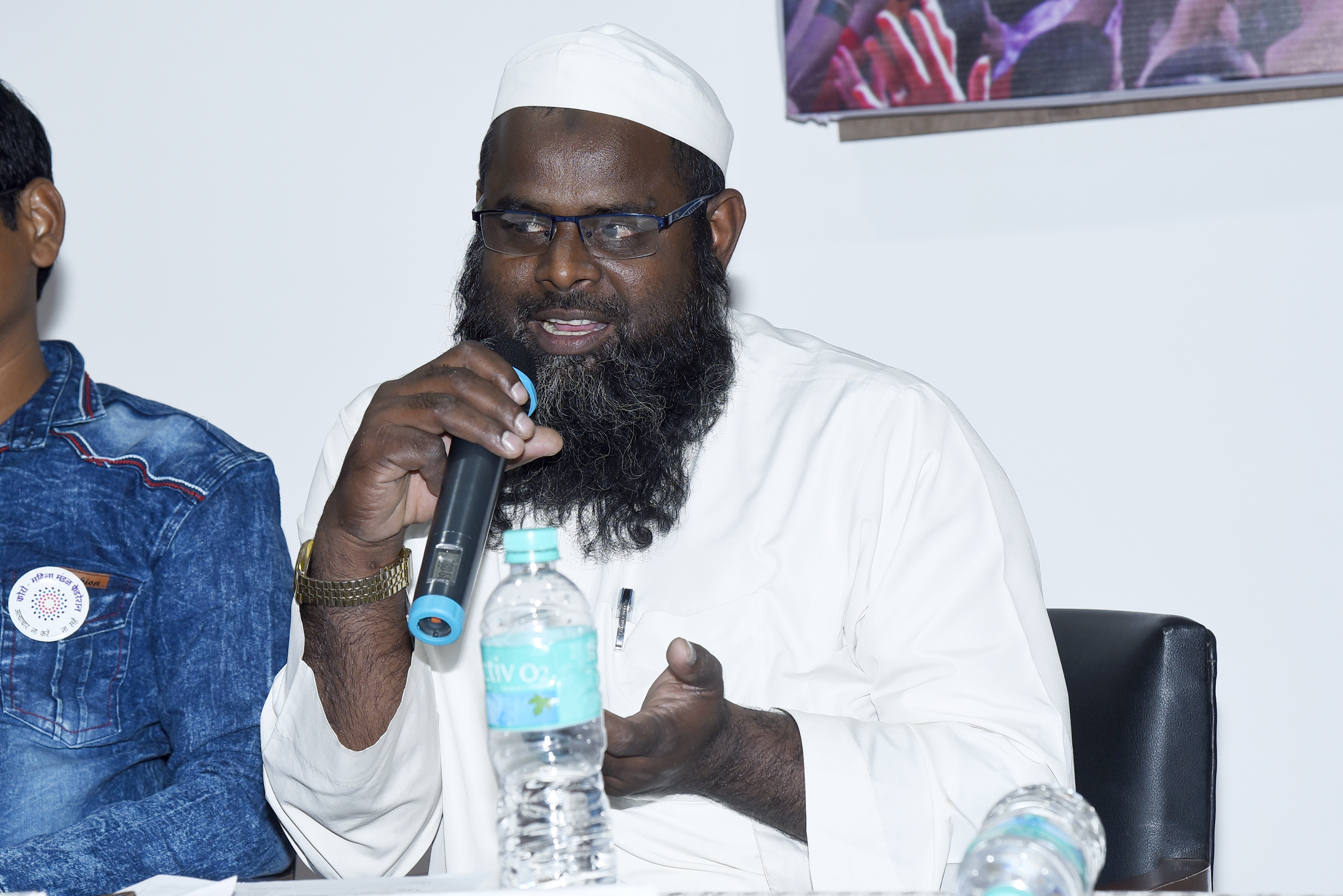 Maulana Mohammed Hussain shared the trigger for that turned from CORO’s antagonist to a staunch supporter: “the space to be heard.” Reflecting on his radical mindset shift, he said, “I wish I could have had these meetings and discussions when I was much younger.” Dr. Ravi Verma drew on his extraordinary knowledge of gender mainstreaming to enumerate the challenges faced by programs that aim to include men: “The effects don’t flow upstream, pushback when power is threatened, taking on deeply patriarchal language…” Poonam Kathuria of SWATI (Society for Women’s Action and Training Initiatives) insightfully commented, “Men are not born, they are created by society.” To her fellow activists and practitioners, she urged, “We must start thinking about the men in our own lives and how they contribute to the VAWG, as adults responsible for their own actions.” Santosh Jadhav of Loknirnay in Nashik shared his experiences as a man working to end domestic violence. Urvashi Gandhi of Breakthrough India talked about the importance of leveraging mainstream media to spread the message and reach otherwise disengaged stakeholders, including men.

How did CORO design a strategy to address VAWG? What were its successes and shortcomings? Are there other models we can learn from in order to improve? With these questions as the starting point, our team leader, Anita Kamble described her role leading the implementation of CORO’s anti-VAWG model, by building the capacity of grassroots leaders to work within their own communities at the household level, to bring change to people’s circumstances and mentalities. Neha, who only joined CORO a few months ago, related her story of restriction and abuse and the safety and support system she found in CORO. Anuradha Kapoor drew on her observations of the power of therapy provided by her organization, Swayam, to advocate for increased awareness and support for the mental health of the survivors of #VAWG. She expounded, “By encouraging creativity, dreams, inner strength, in this way women’s voices can reach the world.” On the importance of the internet in such models, Professor Vibhuti Patel whimsically noted, “Online spaces for young feminists like Feminism in India provide democratic platforms to tackle the many tentacles of the patriarchy ‘octopus’.” 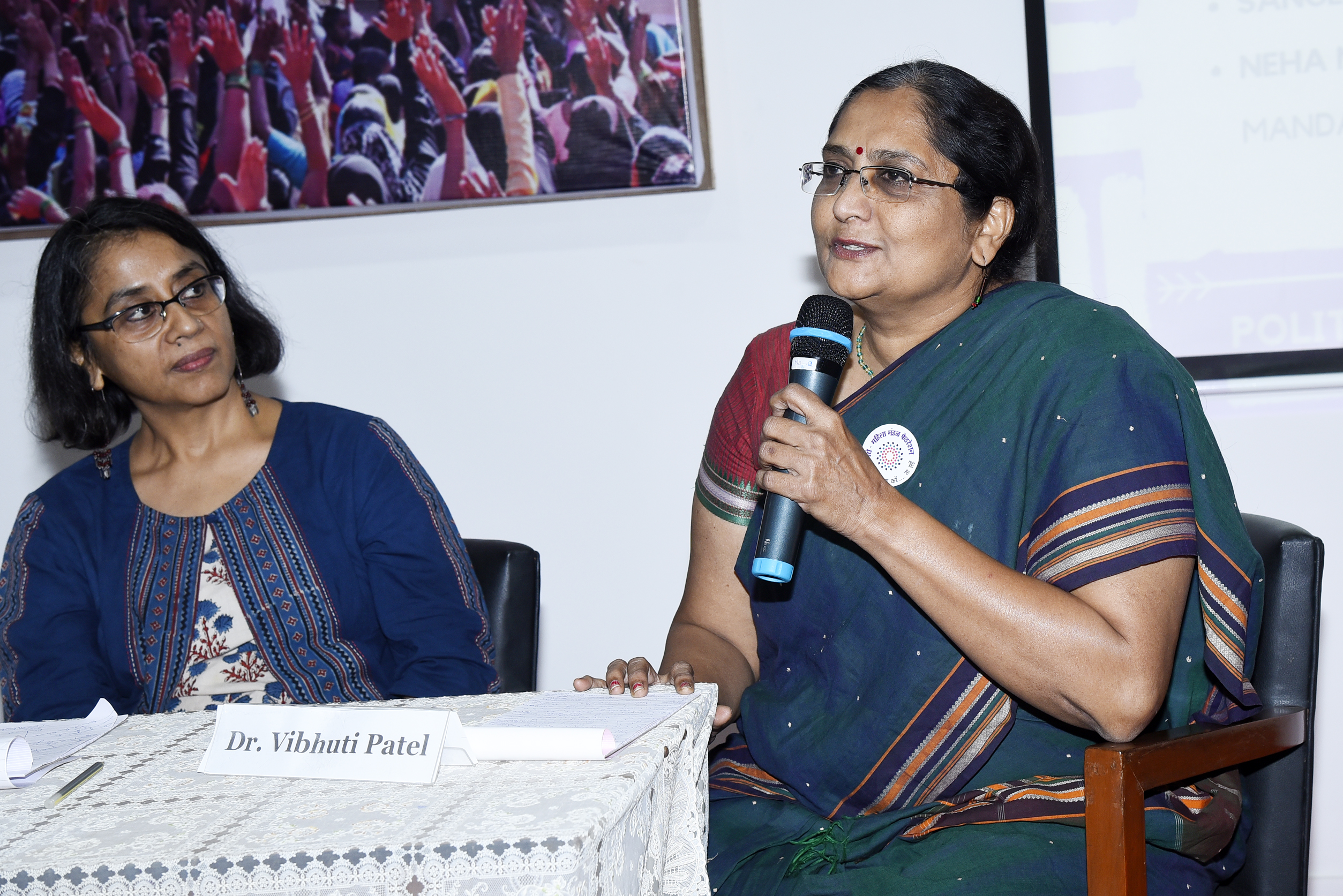 In a thought-provoking exchange, Professor Vibhuti asked, “How can we create a holistic crisis support center for women?” To which Anuradha Kapoor responded “Rather, how can we change the mindsets of the duty beaters of the current problematic support systems?” 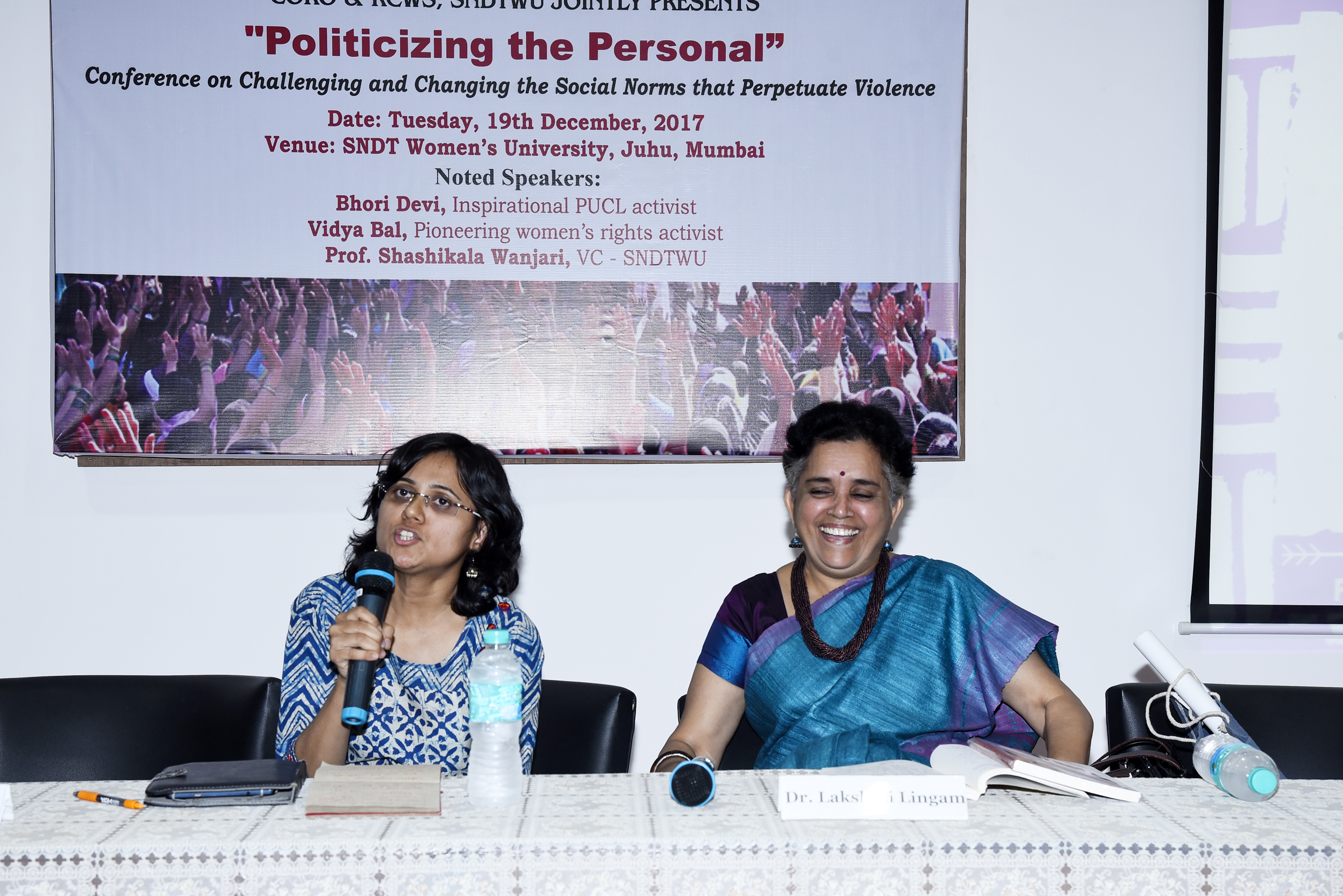 In this open forum session, the main focus was to collect thoughts from the audience and participants about where and how initiatives to address VAWG tend to fail. Professor Lingam and Supriya Jaan introduced the rationale for the session as an opportunity to learn by grappling with an often overlooked but vital topic - where do we go wrong? 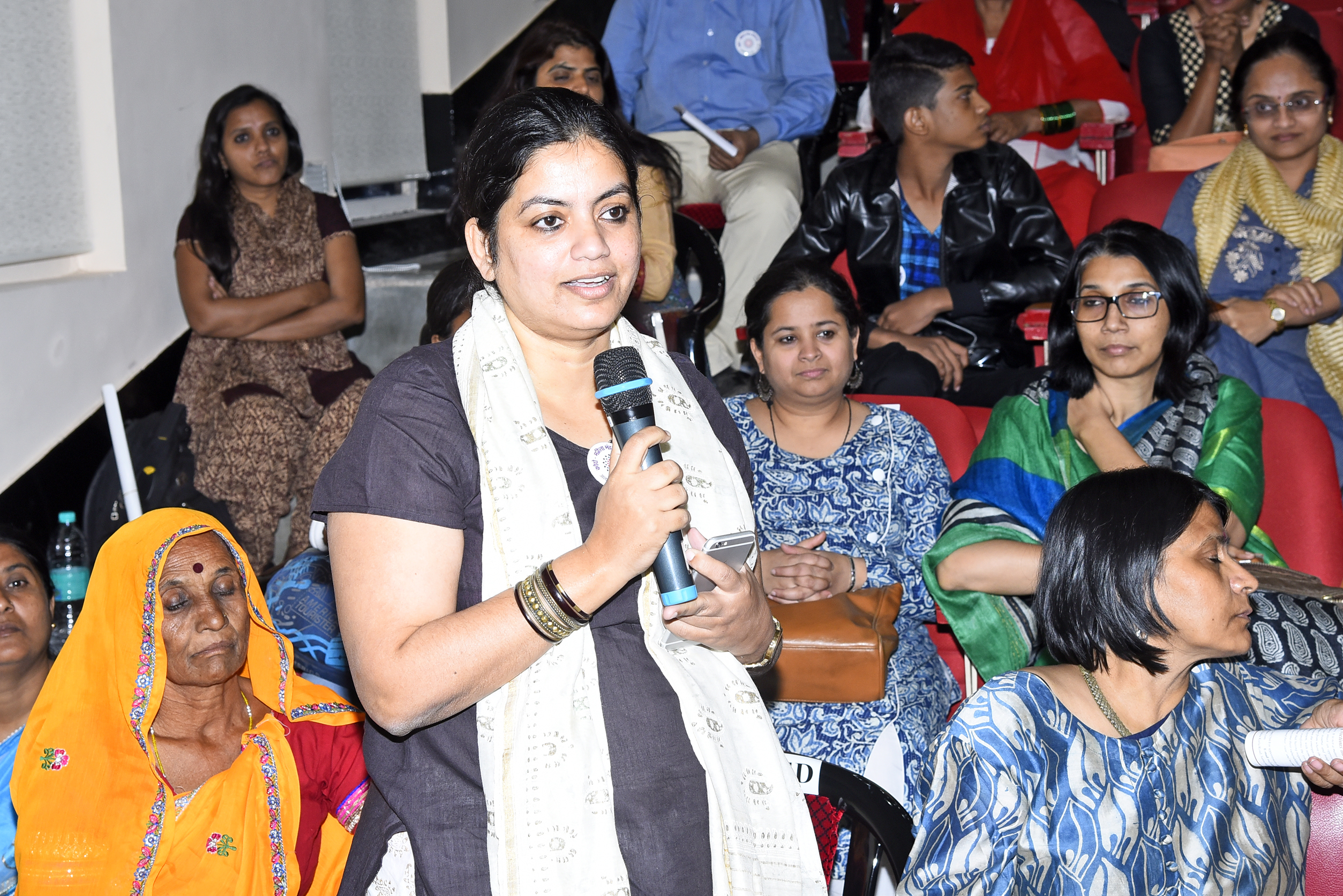 The resulting discussion took on a broader scope, ranging from the effect of a conservative political climate on grassroots campaigns to the pitfalls of activism through the legal system. One audience member critiqued the invisibility and exclusion of differently-abled voices from the discussion, including the conference at hand. 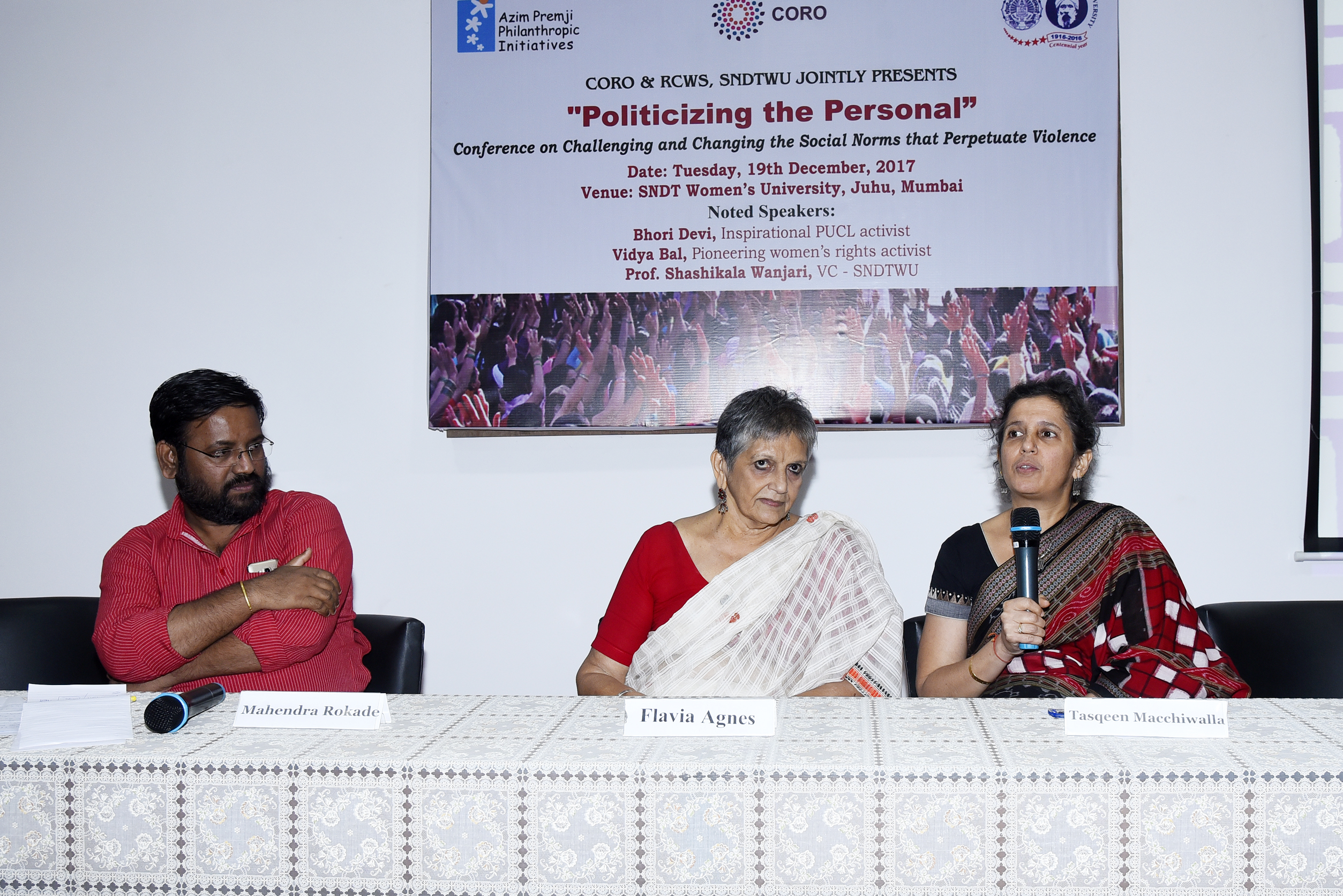 Although looking into the future is no easy task, our final session for the day attempted to do exactly that. Flavia Agnes drew on her deep legal expertise to argue that social change should be fought for outside the courtroom. She remarked, “We are not taking responsibilities for the demands we make of the legal system, of harsh criminalization penalties instead of addressing the issue at the roots.” In regards to future issues, she exclaimed, “As NGOs we talk about our successes not our failures because we are dependent on the funders! And this is our challenge!” Tasqeen Machhiwalla wrapped up the discussion on the way forward by succinctly enumerating the importance of: sisterhood, bringing in voices like Maulana overlooked as a youth, and creating relationships instead of competitions with other organizations working on the same issues. 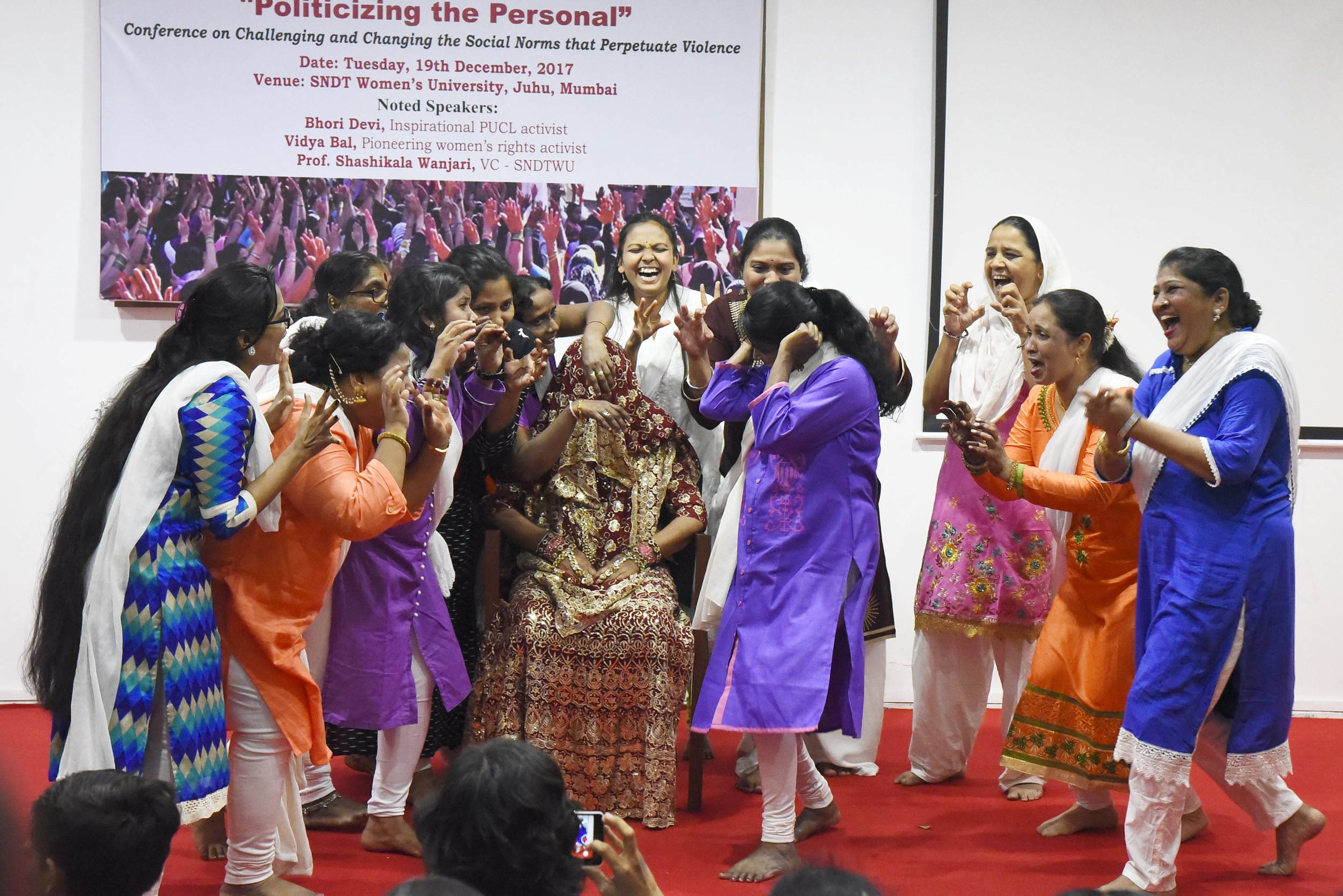 A long but fulfilling day concluded with an entertaining song and skit performance by CORO’s grassroot leaders. The conference ended as it began, with invigorating, affirming voices of change.